Glenn Keith Davis, 89, of Shawnee, Kan., passed away December 12, 2013. The visitation will be from 12 to 2 p.m. Monday, Dec. 16, at Lenexa United Methodist Church, 9138 Caenen Lake Rd, Lenexa, Kan., followed by the funeral service at 2 p.m. Graveside burial service will be at 11 a.m. Tuesday, Dec. 17, at Leavenworth National Cemetery, Leavenworth, Kan. Procession will leave from Amos Funeral Home at 10 a.m. for those wishing to attend. In lieu of flowers, the family suggests donations be made to Lenexa United Methodist Church or a charity of your choice . Glenn was born to Keith and Grace (Fann) Davis on May 4, 1924, in Kansas City, Mo. He graduated from Manual High School in 1943 and received a B.S. in Mechanical Engineering from The University of Missouri in 1950. He was a Veteran of World War II serving as an aviation machinist mate 3rd class in the United States Navy aboard the USS Franklin. The story of his harrowing experience aboard the Franklin on March 19, 1945, appears in the book, The Inferno, by Joseph Springer. He married Wanda Jean Murray in 1946 and on Dec. 22, they would have celebrated their 67th anniversary. They have lived in Shawnee Mission, Kan., since 1959. He worked eight years at General Motors, followed by 25 years at Bendix, now Honeywell. After his retirement in Feb. 1983, Glenn worked extensively on genealogy. He also began oil painting still life, scenery and portraits of his children and grandchildren. He was an active member of the Lenexa United Methodist Church and a lifetime member of the Shawnee VFW Post 10552. He volunteered several years with Junior Achievement during his tenure at Bendix. Glenn was preceded in death by two sisters, Margery Reiss and Mildred Murray; and two grandchildren, Joshua and Jennifer Conyers. He is survived by three children, Steve and his wife Lelah Davis of Columbus, Ohio, Nancy Wagner, and Judy and her husband Ken Hensley of Shawnee Mission. He is also survived by seven grandchildren, 10 great- grandchildren, nieces and nephews who will greatly miss him. Online condolences may be expressed at http://www.amosfamily.com. Arr.: Amos Family Chapel of Shawnee, (913) 631-5566. The Amos Family Funeral Home, Crematory, Chapels. 913-631-5566 amosfamily.com

LEWISVILLE —, 95, of Lewisville, went home to be with the Lord, Dec. 14, 2013 surrounded by his family. He was born in Surry County, N.C., the son of Byrd Winfield Snow and Ida Victoria Snow. Arvel served his country in World War II as a marine sergeant aboard the USS Franklin aircraft carrier taking heavy fire from the enemy. His passion was the Kingdom of God and he founded and supported several churches, taking joy in seeing others follow Christ. Arvel was known for his love of God and joy of living. He established Hanes Furniture in 1952 and enjoyed a successful career as a business owner, making many friends over the years. He was an astute business man who always cared for the less fortunate. His family looked to him for guidance and encouragement. He was an awesome bass fisherman. He was preceded in death by his infant son, Tim, and beloved brothers and sisters. Surviving are his loving wife of 70 years, Edith Snow; two sons, Wes Snow and wife, Mary Jane, and Dan Snow and wife, Diana; a daughter, Joy Beaver and husband, Bob; grandchildren, Shannon Langdon and husband, Jeff, Amy Hotchkiss and husband, Brian, Derek Snow, Leah Beaver, Brian Beaver; great-grandchildren, Jackson, Mason and Lilly Langdon; and brother, A.C. Snow and wife, Nancy, of Raleigh. A funeral service will be held at 11 a.m. Wednesday, Dec. 18, 2013, at Hayworth-Miller Silas Creek Chapel with the Rev. Earl Newton, the Rev. David Stetler and the Rev. Tomas Montenegro officiating. Interment will follow in Salem Baptist Church Cemetery in Dobson. The family will receive friends from 6 to 8 p.m. Tuesday, Dec. 17, 2013, at the funeral home. The family expresses gratitude for the many prayers, visits and acts of kindness received. They are so grateful to the staff of Hospice, who made it possible for Arvel to come home. Memorials may be made to Hospice and Palliative Care Center, 101 Hospice Lane, Winston-Salem, NC 27013. Online condolences may be made at www.hayworth-miller.com. For I am now ready to be offered and the time of my departure is at hand. I have fought a good fight, I have finished the course, I have kept the faith. — II Timothy 4:6.

Arthur Dorsey LaPole, 85, of West Ocean City passed away on 8 July 2012 at Coastal Hospice at the Lake. Arthur was born in Catonsville, and is the son of Charles LaPole and Irene Burall. He was preceeded in death by his wife and lifelong partner Esther. Arthur was a hardworking, simple and honest man and will be remembered by many with endearing nicknames including Reds, Art, Mr. Dorsey, Dorse, and Pike. Arthur’s satisfaction and contentment came from within; often with small anonymous and selfless deeds.

Arthur served in WWII aboard the aircraft carrier USS Franklin. Art was never one to complain about surviving the violent attack and near sinking of his ship, but clearly his approach to work, family and life were forever altered. During the war and throughout her life, he supported his single hardworking mother.

Arthur married Esther Connor in 1946, began his family and his long career in machinery design, production and servicing. He held positions at the Poole Foundry, Elicott Machine Company, and in the US federal government. Art’s passions included boating, fishing, woodworking, and teaching for the US Coast Guard.

Braddick, Karl Hausen Karl Hausen Braddick was born in Big Spring, Texas on Feb 1, 1919, the first of 12 children to Karl and Egla Louzelle Braddick. Karl grew up in Northwest Houston during the depression. The family lived on the original 10 acres settled by Karl’s grandfather, where they grew their own food, bartered, and hunted to put food on the table. Karl quit High School to work for the WPA with his father to help feed the family, and he later completed his GED to receive his High School Diploma. His aunt Hazel paid for him to attend and receive a two year degree in accounting. His first job was working in the mail room for Superior Oil in Houston. On July 11, 1941 Karl married Martha Jane Holland, his first kiss and the love of his life. After the attack on Pearl Harbor, Karl enlisted in the Navy and became an optical range finder operator. In the war, he became a plank owner on two ships: The USS Saufley DDS 465 and the USS Franklin CV 13. Karl was in seven major battles and many skirmishes earning one silver and two bronze stars. On March 1945, The USS Franklin was hit with two 500 lb bombs hitting the stored ammo and blowing the ship apart killing over 800 men. After the war, Karl went back to his job with Superior Oil where he moved up accepting positions in Midland, Texas, Los Angeles, California, Caracas, Venezuela, New York, New York, and Dallas, Texas. He retired with Exxon Mobil in 1985. Karl and Jane moved to Canyon Lake where they purchased property and built a home that people would want to visit. Karl loved to have fun and share with friends. Karl died peacefully at home being cared for by Tom and Maria Braddick. Karl is survived by Sons: Karl Braddick, Tom and Maria Braddick, Wayne and Suzanne Braddick. Grandchildren: Lori Johnson, Jonathan Braddick, Michael Braddick, Omar Braddick, Ricardo Braddick, and Claire Braddick. Great Grandchildren: Mundo Braddick, Isaiah Braddick, Noah Braddick, and Christian Braddick. The Services will be held at: Brookside Memorial Park, 13401 Eastex Freeway, Houston, Tx. 77039. 281-449-2526. Visitation will be on Tuesday January 7th 5 to 8PM and the Funeral service will be Wednesday January 8th at 11AM.

BAILEYVILLE – Ernest Stafford Scott, 87, passed away Jan. 5, 2014, surrounded by his family at a Bangor health care facility. He was born April 1, 1926, to Ralph and Margaret Scott in Cambridge, Mass.

He grew up in Baileyville and was educated in local schools. He was a true patriot, of that there was no doubt. During World War II, he served in the U.S. Navy from October 1943-March 1947 on the U.S.S. Franklin CV13 as an engineer in the boiler room. He survived the bombing of the ship-724 of the 3448 men perished. Nothing ever severed the ties that he and his shipmates had. His continued dedication to his fellow vets was always a large part of his life. Author Stephen Jackson and Scotty met at a ships reunion in Bar Harbor. His published story “Missed The Saturday Dance” containing personal memoirs of the men he served with on the U.S.S. Franklin is being used in a screenplay for the big screen.

He was an active Brother of the Masons of Lewey’s Island Lodge No. 138 and recently received his 65 year pin. He belonged to the Legion Wren Post 23 in Baileyville. He was an active member of the U.S.S. Franklin CV13 Museum Association. He belonged to the International Brotherhood of Electrical Workers for 60 years. He was blessed with an exceptional sense of humor which he possessed right up to the end. He was a great story teller and never failed to punctuate his stories with a pinch of humor. In retirement, he loved working “the farm,” tilling, gardening, and cutting wood. He was also very musically inclined and enjoyed “building” his spaghetti sauces and making his “Grammy Soups.”

He is survived by his wife, Vivian Scott; three daughters, Barbara Wheaton of Alexander, Phyllis Wheaton and husband, Jonathan, of Alexander, and Vicki Martin and husband, Lou, of Bangor; seven grandchildren, Wendy Wing and husband, Scott, of Monmouth, Leigh Busque and husband, Joe, of Orrington, Robin Gagner of Hampden, Jill Moffitt and husband, Jason, of Holden, Patricia Clark of Bangor, Tim Clark and wife, Gina, of Ohio, and Karen Clark of Texas; 15 great-grandchildren; three sisters, Charlene Perkins, Lois Stimson, and Greta Leighton all of Baileyville; and many nieces and nephews.

A memorial service in his honor will be held 1 p.m. Jan. 14, at the Peoples United Methodist Church in Baileyville. Spring interment will be at the cemetery in South Princeton. Gifts may be made in his memory to Maine Veterans Home B Unit, 44 Hogan Road, Bangor, ME, 04401.
Published in BDN Maine on Jan. 11, 2014
– See more at: http://obituaries.bangordailynews.com/obituaries/bdnmaine/obituary.aspx?n=ernest-stafford-scott&pid=169016544&eid=sp_ommatch&eid=sp_ommatch#sthash.FRmfpH6h.dpuf 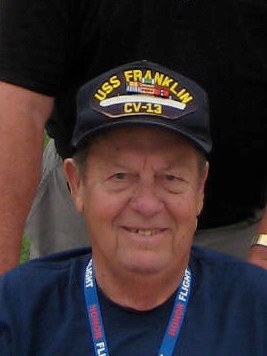 Newcomb, Howard “Newk”, 86 years old, peacefully went to be with the Lord, Saturday, June 1st. He was born June 11, 1926 to Howard E. and Louise (Gehm) Newcomb. He was a proud veteran of WWII, serving in the Navy aboard the aircraft carrier USS Franklin. He retired from Middletown Paperboard in 1989, where he was Maintenance Superintendent and at that time discovered he had a passion for playing golf, scoring 7 “Holes- in-One”. He was a member of the Wildwood Golf Club, the American Legion, The Veterans of Foreign Wars and the Disabled American Veterans. He was one of the original founders of Doty House facility for children with disabilities. He was preceded in death by his parents; his wife of 65 years Ruth (Carpenter) Newcomb; sisters Barbara Warmoth and Virginia Mays; infant brother James Newcomb and grandson, Jason Newcomb. He is survived by daughters, Billie Martens of Franklin and Kathy (Ben) Cole of Middletown; sons Tim Newcomb of Franklin, Howard “Howie” Newcomb of Middletown, Paul (Pixie) Newcomb of Ft. Myers, FL, Pat (Gina) Newcomb of Corvallis, OR and Michael Newcomb of Palm Springs, CA; 11 Grandchildren and 20 Great Grandchildren. Visitations will be held 6-8 pm Thursday, June 6, at Baker-Stevens-Parramore Funeral Home. Funeral services will be held at 10:00 am Friday, June 7, at the funeral home with Reverend Claude Robold officiating. Burial will follow at Woodside Cemetery. Memorial donations may be made to any favorite charity.